After being bitten by a mosquito carrying the dengue virus, the incubation period ranges from 3 to 14 (usually 4 to 7) days before the signs and symptoms of dengue appear. Dengue occurs in two forms:

The disease manifests as a sudden onset of severe headache, chills, pain upon moving the eyes, and low backache. Painful aching in the legs and joints (myalgias and arthralgias—severe pain that gives it the nick-name break-bone fever or bonecrusher disease) occurs during the first hours of illness. The temperature rises quickly as high as 40° C, with relative low heart rate (bradycardia) and low blood pressure (hypotension). The dengue rash is characteristically bright red petechiae and usually appears first on the lower limbs and the chest (see figure 2). The glands (lymph nodes) in the neck and groin are often swollen. In some patients, it spreads to cover most of the body. There may also be gastritis with some combination of associated abdominal pain, nausea, vomiting, or diarrhea. Some cases develop much milder symptoms which can be misdiagnosed as influenza, chikungunya, or other viral infection when no rash is present. The classic dengue fever lasts about six to seven days, with a smaller peak of fever at the trailing end of the disease (the so-called biphasic pattern). Clinically, the platelet count will drop until the patient's temperature is normal.

Dengue virus infections are sometimes confused with chikungunya viral infection, because both diseases can present with high temperatures and myalgias (muscle pain) in people living in or returning from tropical areas (see figure 2, and also diagnosis of Dengue and Chikungunya). Although these diseases share similar clinical features, prominent and prolonged joint pains are more consistent with chikungunya, whereas haemorrhage is more common in cases of dengue virus infection. 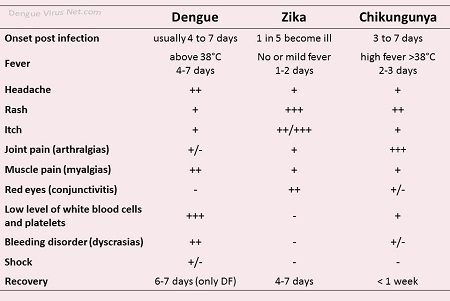 Figure 2: Comparisment of Dengue, Zika and Chikungunya symptoms. You can also download the original image in high resolution as jpg, tiff or powerpoint file.

Dengue hemorrhagic fever (DHF) is caused by the same viruses and is characterized by increased vascular permeability, hypovolaemia and abnormal blood clotting mechanisms. DHF is a potentially deadly complication with symptoms similar to those of dengue fever, but after several days the patient becomes irritable, restless, and sweaty. The illness often begins with a sudden rise in temperature accompanied by facial flush and other flu-like symptoms. The fever usually continues for two to seven days and can be as high as 41°C, possibly with convulsions and other complications.

In moderate DHF cases, all signs and symptoms abate after the fever subsides. In severe cases, the patient's condition may suddenly deteriorate after a few days of fever; the temperature drops, followed by signs of circulatory failure, and the patient may rapidly go into a critical state of shock. The Dengue Shock Syndrome (DSS) is characterized by bleeding that may appear as tiny spots of blood on the skin (petechiae) and larger patches of blood under the skin (ecchymoses). Minor injuries may cause bleeding (see figure 4). Shock may cause death within 12 to 24 hours. Patients can recover following appropriate medical treatment.

The progress towards DHF or DSS occur after 3-5 days of fever (see figure 3). At this time, fever has often come down. This may mislead many of us to believe that the patient is heading towards recovery. In fact, this is the most dangerous period that requires high vigilance from care-givers.

Figure 3. Generalized time course of the events associated with DF, DHF and DSS. The incubation period before the development of signs of infection generally ranges from 4 to 7 days.


Recognition of Dengue Haemorrhagic Fever (DHF)
- Symptoms similar to dengue fever plus, any one of the following:
- Severe and continuous pain in abdomen
- Bleeding from the nose, mouth and gums or skin bruising
- Frequent vomiting with or without blood
- Black stools, like coal tar
- Excessive thirst (dry mouth)
- Pale, cold skin
- Restlessness, or sleepiness