Although there is a commercially available vaccine against dengue, prevention is still the most important step to reduce the risk of dengue infection. There are several ways of prevention: 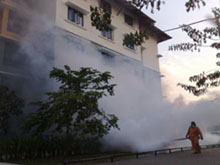 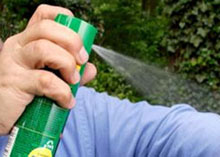 The best way to reduce mosquitoes is to eliminate the places where the mosquito lays her eggs, like artificial containers that hold water in and around the home (see figure 2, video 2 and 3). In urban areas, Aedes mosquitos breed on water collections in artificial containers such as plastic cups, used tires, broken bottles, flower pots, etc (see also transmission of dengue). Periodic draining or removal of artificial containers is the most effective way of reducing the breeding grounds for mosquitos. Larvicide treatment is another effective way to control the vector larvae but the larvicide chosen should be long-lasting and preferably. There are some very effective insect growth regulators (IGRs) available which are both safe and long-lasting (e.g. pyriproxyfen). For reducing the adult mosquito load, fogging with insecticide is somewhat effective.

To eliminate standing water:
- Unclog roof gutters;
- Empty children's wading pools at least once a week;
- Change water in birdbaths at least weekly;
- Get rid of old tires in your yard, as they collect standing water;
- Empty unused containers, such as flower pots, regularly or store them upside down;
- Drain any collected water from afire pit regularly. 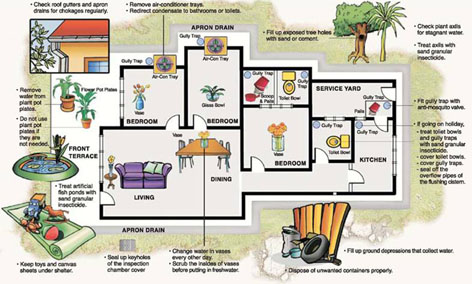 Natural control - Mesocyclops
In 1998, scientists from the Queensland Institute of Medical Research (QIMR) in Australia and Vietnam's Ministry of Health introduced a scheme that encouraged children to place a water bug, the crustacean Mesocyclops, in water tanks and discarded containers where the Aedes aegypti mosquito was known to thrive. This method is viewed as being more cost-effective and more environmentally friendly than pesticides, though not as effective, and requires the continuing participation of the community.

Even though this method of mosquito control was successful in rural provinces, not much is known about how effective it could be if applied to cities and urban areas. The Mesocyclops can survive and breed in large water containers, but would not be able to do so in small containers of which most urban area have within their homes. Also, Mesocyclops are hosts for the guinea worm, a pathogen that causes a parasite infection, and so this method of mosquito control cannot be used in countries that are still susceptible to the guinea worm. The biggest dilemma with Mesocyclops is that its success depends on the participation of the community. This idea of a possible parasite bearing creature in household water containers dissuades people from continuing the process of inoculation, and without the support and work of everyone living in the city, this method would not be successful.

Prevention of mosquito bites is another way of preventing disease. The adult mosquitoes like to bite inside as well as around homes, during the day and at night when the lights are on. To protect yourself, use insect repellent on your skin while indoors or out, mosquito traps or mosquito nets. When used properly, repellents are safe for kids and adults alike. Keep in mind that even though some of them are classified as pesticides by the Environmental Protection Agency (EPA), repellents don't kill mosquitoes. So you may still see these annoying insects buzzing about. Repellents simply make it more difficult for mosquitoes to find you.

When possible, wear also long sleeves and pants for additional protection. Also, make sure window and door screens are secure and without holes. If available, use air-conditioning (see also prevention for travelers.

Clothing tips to keep in mind include:
- Wear long-sleeved shirts;
- Wear socks;
- Wear long pants and consider tucking your pants into your socks;
- Wear light-colored clothing, since mosquitoes are more attracted to darker colors;
- Apply mosquito repellent to your clothing, shoes, and camping gear and bed netting;
- Wear a full-brimmed hat to protect your head and neck;
- Consider wearing a mosquito net to cover your head and face or torso