The viral etiology and the transmission by mosquitoes were discovered in the 20th century. Population movements during World War II spread the disease globally. The first epidemic of dengue hemorrhagic fever (DHF) was described in Southeast Asia, Manila in 1953. After that, outbreaks of dengue fever became more common. In the 1950s, 9 countries reported dengue outbreaks. Epidemic dengue has become more common since the 1980s. By the late 1990s, dengue was the most important mosquito-borne disease affecting humans after malaria, with around 40 million cases of dengue fever and several hundred thousand cases of dengue hemorrhagic fever each year (see figure 1). Significant outbreaks of dengue fever tend to occur every five or six months. DHF epidemics occur yearly, with major outbreaks occurring approximately every 3 years. This pattern has repeated itself as dengue fever has spread to new regions. 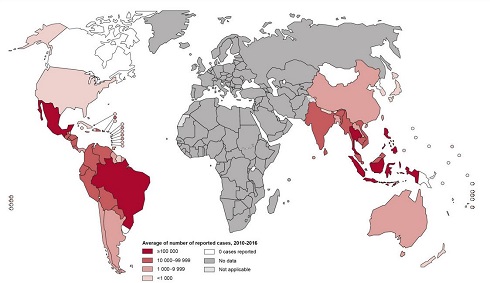 
Although initial epidemics were located in urban areas, increased dengue spread has involved suburban and rural locales in Asia and Latin America. The only continents that do not experience dengue transmission include Europe and Antarctica. Dengue transmission spread from Southeast Asia into surrounding subtropical and tropical Asian countries, southern China and southern Taiwan, the Indian subcontinent and Sri Lanka, and down the island nations of Malaysia, the Philippines, New Guinea, northeastern Australia, and several Pacific islands, including Tahiti, Palau, Tonga, and the Cook Islands (see figure 1). Nepal has not reported dengue transmission. Hyperendemic transmission is reported in Vietnam, Thailand, Indonesia, Pakistan, India, Malaysia, and the Philippines. Dengue continues to extend its range.
Note that the reported cases of dengue are an under-representation of all cases when accounting for subclinical cases and cases where the patient did not present for medical treatment.


Southeast Asia
DHF is one of the leading causes of hospitalization and death in children in many Southeast Asian countries, with Indonesia reporting the majority of dengue hemorrhagic fever cases. In Indonesia, young adults in Jakarta and provincial areas make up a larger percentage of infected patients. During the 2000 epidemic in Bangladesh, up to 82% of hospitalized patients were adults, and all deaths occurred in patients older than 5 years. Since 1982 in Singapore, more than 50% of deaths have occurred in individuals older than 15 years. In Singapore, there are 4,000–5,000 reported cases of dengue fever or dengue haemorrhagic fever every year. In the year 2004, there were seven deaths from dengue shock syndrome. In 2013 there was a major outbreak in Singapore with a total of 21,324 cases by the end of the year.
The dengue case load in the Philippines for the first quarter of 2011 was some 5% higher than the preceding year, at 18,885 cases and 115 deaths. Some 52,008 cases of dengue fever were recorded in Thailand in 2012, with 50 deaths. In 2014, dengue deaths have tripled in Malaysia over 2013, after tripling 2013 over 2012. In tropical and subtropical Asia, nearly all nations had reported explosive increases In Thailand, officials are anticipating as many cases in 2016 as occurred during a large outbreak in 1978, the largest ever recorded. Since the beginning of the year, more than 8,000 cases have occurred, compared with just over 4,000 cases over the same period in 2015. In 2019, A dengue epidemic has been declared in the Philippines after 600 dead and over 150,000 cases reported.

Asia
In Pakistan, in the summer of 2011, more than 300 people died of Dengue fever. The prevalence of the disease was over 14,000. The outbreaks occurred mostly in the Lahore area, Punjab, Pakistan. In 2013, in Guangdong, China, there was a 15-fold increase over last year and 5-fold increase of mosquitos has left the normally lightly hit region stunned. Likewise Taiwan also had a 10-fold increase in cases in 2013. In 2015, China's caseload has plunged to less than a tenth of the prior year due to massive releases of sterilized mosquitos. A Dengue fever outbreak in the Indian state of Kerala in May and June 2017 had caused 6808 confirmed infections and 13 deaths by June 16. In Sri Lanka, there were 180,000 reported cases in 2017. The majority of cases being reported from the Western province. The highest numbers of dengue cases were reported during the 20 week of 2017. Sri Lankan health authorities warned that the country was facing a dengue epidemic with at least 301 patients dead. A dengue fever outbreak in Bangladesh starting April 2019 has caused over 20,000 infected patients and 50 deaths so far.

South America
There was a serious outbreak in Rio de Janeiro in February 2002 affecting around one million people and killing sixteen. On March 20, 2008, the secretary of health of the state of Rio de Janeiro, Sérgio Côrtes, announced that 23,555 cases of dengue, including 30 deaths, had been recorded in the state in less than three months. By April 3, 2008, the number of cases reported rose to 55,000. An epidemic broke out in Bolivia in early 2009, in which 18 people have died and 31,000 infected. In the same year there was a dengue outbreak in Argentina in the northern provinces of Chaco, Catamarca, Salta, Jujuy, and Corrientes, with over 9673 cases reported as of April 11, 2009 by the Health Ministry. Some travelers from the affected zones have spread the fever as far south as Buenos Aires.
Major efforts to control the epidemic in Argentina are focused on preventing its vector from reproducing. This is addressed by asking people to dry out all possible water reservoirs from where mosquitoes could proliferate. Previously, dengue epidemics were rare in South America because the mosquitoes had been eradicated from most of the region through coordinated vector-control efforts. Systematic spraying was halted in the early 1970s because of environmental concerns. By the 1990s, Aedes aegypti mosquitoes repopulated most of the countries in which they had been eliminated. Hyperendemic circulation of all four dengue serotypes is now present in the northern countries of South America. Brazil, Colombia, and Venezuela report the most cases of dengue and dengue hemorrhagic fever. In 2010, Latin America alone reported a sum of 1.5 million cases. In only 7 weeks in 2013, in Brazil some 205,000 cases of dengue were reported. In Peru, nearly 400 cases have been reported until March 2013 of whoch two of them were fatal. Since the beginning of 2013, in Paraguay 35 people have died after contracting dengue fever and almost 70,000 are still infected. Argentina is registering a Dengue fever outbreak in late January 2016 with 13 of 24 provinces affected.

Caribbean
In 1981, the first DHF epidemic in the Caribbean occurred in Cuba and involved serotype 2 dengue (DENV-2). Previously, serotype 1 dengue (DENV-1) was introduced into a largely susceptible population in Cuba in 1977. Serosurveys indicated that more than 44% of the population was infected, with only mild disease reported. With the introduction of serotype 2 dengue, hundreds of thousands of cases of dengue in both children and adults were reported, including 24,000 cases of DHF, 10,000 cases of dengue shock syndrome (DSS), and 158 reported deaths. Significant outbreaks of dengue have been reported in 2005 and 2006 in Puerto Rico, the US Virgin Islands, the Dominican Republic, Barbados, Curacao, Guadeloupe, and Martinique. Outbreaks have been reported in Puerto Rico since 1915 and large island-wide epidemics have been documented since the late 1960s. The most recent island-wide epidemic occurred in 2007, when more than 10,000 cases were diagnosed. In Puerto Rico, and most of the Caribbean Basin, the mosquito is abundant year-round. In 2010 there was on outbreak occurring in Puerto Rico with 5382 confirmed infections and 20 deaths.

Africa
The epidemiology of dengue fever in Africa is more poorly characterized. The mosquito is present in a large portion of the Middle East and sub-Saharan Africa. Dengue fever is present in 19 countries on the African continent. In a 1993 epidemic in the Comoros, an estimated 60,000 persons were infected with dengue. However, no major dengue hemorrhagic fever epidemics have occurred in Africa, despite the fact that all 4 dengue serotypes circulate in the continent.

Australia and Oceania
An outbreak of dengue fever was declared in Cairns, located in the tropical north of Queensland, Australia on 1 December 2008. As at 3 March 2009 there were 503 confirmed cases of dengue fever, in a residential population of 152,137. Outbreaks were subsequently declared the neighbouring cities and towns of Townsville (outbreak declared 5 January 2009), Port Douglas (6 February 2009), Yarrabah (19 February 2009), Injinoo (24 February 2009), Innisfail (27 February 2009) and Rockhampton (10 March 2009). There have been occurrences of dengue types one, two, three and four in the region. March 4 2009, Queensland Health had confirmed an elderly woman had died from dengue fever in Cairns, in the first fatality since the epidemic began last year. The statement said that although the woman had other health problems, she tested positive for dengue and the disease probably contributed to her death.
In the summer of 2019 an outbreak was confirmed in the Oceania. 276 cases and one death were reported in the Marshall Islands, resulting in the goverment halting travel between the urban centers of Ebeye and Majuro to the outter islands. Outbreakers were also reported in Palau, Federated States of Micronesia, the Cook Islands, Tuvalu, and the Philippines.

United States of America
Nearly all dengue cases reported in the 48 continental states were acquired elsewhere by travelers or immigrants from Puerto Rico, the U.S. Virgin Islands, Samoa and Guam, which are endemic for the virus. Because contact between the mosquito Aedes aegypti and people is infrequent in the continental U.S., these imported cases rarely result in secondary transmission. The mosquito is currently seasonally abundant in some areas of the southwestern and southeastern United States, including Texas, Arizona, New Mexico, Louisiana, Mississippi, Alabama, Georgia, and mid to south Florida. Aedes aegypti has also been reported sporadically in portions of North Carolina, South Carolina, Tennessee, Arkansas, Maryland, and New Jersey. The last reported continental dengue outbreak was in south Texas in 2005. A small dengue outbreak occurred in Hawaii in 2001. Dengue appeared in the Hawaiian Islands in late 2015, with at least 190 cases confirmed by year end. Most cases were reported on the island of Hawaii.

Europe
Europe does not have an appropriate mosquito population to allow further spread of dengue from viremic patients returning from other countries. Therefore, dengue fever does not naturally occur in the European Union and in continental Europe. As such, the disease is not statutorily notifiable in most member states. However, dengue does occur in several overseas territories of European Union members. In recent decades, reports of dengue infections in long-term expatriates, aid workers, military personnel, immigrants, and travelers returning from the tropics and subtropics have been increasing.